And if you see it when you shop for jewelry in the DC area, should you buy it? If you’ve been reading this blog long enough, you know that we’re always in favor of buying what you like, so if this gorgeous blue stone appeals to you, then yes! You should buy it. But if you mean is it a precious stone worthy of being in your collection, then the answer to that is an unqualified yes as well. 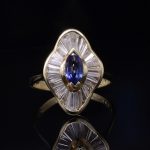 Named for its country of origin—Tanzania—tanzanite was discovered there by Tiffany & Company, and is only found there. It’s actually gem-quality zoisite (which comes in an array of colors from gray to pink to violet), but it’s distinguished by small amounts of vanadium, which prompt its blue color; sure, Tiff could have called it blue zoisite, but tanzanite sounds cooler. The mineral was only discovered in commercial quantities in the 1960s, so it’s a relatively new find, one that nonetheless is second only to sapphire as a preferred blue stone—and it costs less. In fact, some buyers prefer natural tanzanite over a lab-created sapphire at the same price. 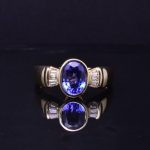 Tanzanite’s range of blue shades is most often enhanced by heating, which your jewelry should disclose when you buy; generally, the lighter the hue, the less expensive the stone. (Naturally blue, untreated tanzanite is very valuable.) Because of its pleochroic qualities, tanzanite’s color can also be affected by how its cut. Take a look at some tanzanite pieces at Loudoun Pawn and Jewelry on Maple Avenue, see the variations, and, perhaps, become a tanzanite convert!