If you buy a diamond at a retail jeweler, it’s likely marked up 100 percent from its wholesale value. If you buy a diamond ring, you could be looking at 200 to 300 percent markup. So what do you think happens when you walk out of the store? That’s right: the value of that purchase plummets faster than a new car you just drove off the lot—usually around 50 percent, though it could be more. 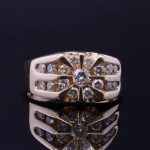 So how do you stop this from happening? Simple: buy the diamond or ring for less from the start. You still may not recoup your full value if you decide to sell it, but you’re going to lose a lot less than if you bought it retail. (If you insist on retail, shop only at independent jewelers that don’t have to use markups that support an entire chain.) Because of these profit markups, it’s difficult even if the diamond increases in value to make your money back.

And the number one reason for that is that there is nobody who is going to buy the diamond at market value. 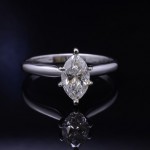 Diamonds sold at jewelry stores are often taken on consignment, so they’re not likely to be bought back for what you paid, which is more than their profit on it. And even if they bought it, they bought it cheap, so they’re more likely to put their money into more purchases from their suppliers—not you. That jeweler simply has no motivation to buy from you. Nor does an independent buyer who can buy the same thing at a store and get a warranty to go with it.

Of course we’re not assuming that you’re going to want to sell your diamond, but working in a pawn shop in Northern Virginia has shown us that all too frequently, people do indeed find themselves in a position to sell—and there are myriad places you might choose to do that, including Craig’s List and eBay. But if you bought the diamond for less in the first place—and pawn shops like Loudoun Jewelry on Maple Avenue sell jewelry at up to 50 percent off retail—you stand to lose less if you need to sell.