The French essayist Jean de la Brueyere wrote that the rarest things in the world, next to a spirit of discernment, are diamonds and pearls. He may have been right about the spirit, but was a little off in the matter of rare gemstones.  To clarify, all gems are rare: the crystallized minerals we value constitute but a fraction of one percent of Earth’s make-up. But with more than 75 percent of American engagements commemorated with diamond rings, it’s easy to see that while diamonds may be rare in nature, they are fairly common in the jewelry arena, and you can find all styles of them throughout pawn shops in Northern Virginia. 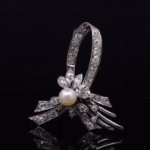 Colored diamonds, on the other hand, are much harder to come by. The rarest of all is the red diamond, with fewer than three dozen ever found, most at less than half a carat. Red diamonds are generally not available at any price, but they occasionally appear at auction, where they have sold for more than a million dollars per carat.  The most famous and largest red diamond is the trillion-cut Moussaieff (also called the Red Shield), which is a whopping 5.11 carats.

Though the Red Shield is considered the single most concentrated source of wealth (discounting radioactive material), the Heart of Eternity, a 27-carat blue diamond valued at 16 million dollars, is deemed the most expensive colored diamond in existence. The blue garnet is another rare and costly gem; it is especially noteworthy because it changes color from blue-green in daylight to purple in UV light.

California is home to benitoite, which is found only in San Benito County. This stone, which when available sells for a relatively affordable $2000 a carat, is a deep blue and disperses light much like a diamond. In 1985, benotoite was named the state gemstone of California. If you can find the ultra-rare taaffeite, a purple-to-red stone which boasts a double refraction and is literally a million times more scarce than diamonds, it’s comparatively reasonable at $500-$4000 per carat. 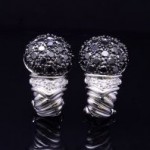 The Guinness Book of World Records once called painite, discovered in Myanmar, the rarest gem on earth. This mineral reveals different colors from different angles, and while it can show reds or pinks, orange and brown shades predominate. Painite proves that rarity and beauty are not always in sync, so cherish your diamond, which is a beautiful and lasting example of Earth’s rare treasures. Find your treasure today when you shop for jewelry and gold in Washington, DC.