Tanzanite Birthstones Can Be Found at Loudoun Jewelry on Maple Avenue

When it comes to pretty and affordable blue stones, tanzanite tops the list. It’s actually a mineral, but the real name—zoisite—doesn’t sound nearly as exotic as the moniker that Tiffany & Co. came up with, which eponymous with Tanzania, where it was first discovered. So popular has the gem become that the American Gem Trade Association added tanzanite as a December birthstone—even though December already had two, zircon and turquoise)—in 2002. No birthstone had been changed since 1912 when the National Association of Jewelers first came up with the list. The reason? Tanzanite was so popular that it would help jewelers sell more jewelry. See for yourself by checking out the tanzanite when you shop for jewelry in the DC area. 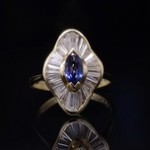 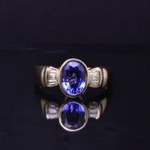 As if that weren’t enough, in 2006, TanzaniteOne Ltd., determined that one month wasn’t enough to celebrate tanzanite as a birthstone; it would be better if tanzanite became the all-purpose birthstone, i.e. the stone in any jewelry that was presented upon the birth of a child. The slogan “Be Born to Tanzanite” was meant to inspire the idea, and was loosely tied to Masai tribal birth practices. If you’ve had children without seeing a bit of tanzanite, it’s probably safe to say the idea really didn’t take off. 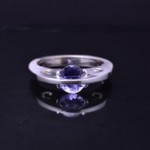 Nonetheless, for fans of blue, tanzanite is still a beautiful alternative to sapphires, and you will see fine examples of it in pawn shops throughout Northern Virginia.