Shopping for July Birthday Jewelry in the DC Area? Celebrate with “Ruby Tuesday”

With the Rolling Stones finishing up their Zip Code tour, and ruby being the birthstone for July, we at Loudoun Jewelry on Maple Ave. thought it might be fun to combine both things and share a little trivia about the Stones’ 1967 hit, “Ruby Tuesday.”

The iconic Rolling Stones have a career that spans more than half a century, with more than 200 million records sales to quantify their success. Their songs run the gamut from hardcore rock to melodic love songs, and “Ruby Tuesday” certainly falls into the latter category. 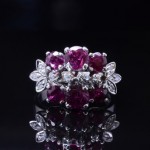 Keith Richards and/or Brian Jones wrote the song, depending on whose story you want to believe, and it’s about a free-spirited girl who was either a former girlfriend or a groupie depending which interview you read. The ambiguity and the slightly nonsensical lyrics never hindered the song’s success. It became a number one hit, is slotted at 303 of the “500 Greatest Songs of All Time” by Rolling Stone magazine, spawned no fewer than fifteen cover versions, and was even borrowed to name a restaurant chain.

Ironically, the song was originally intended as the B side (and in fact had a working title of “Title B”) to “Let’s Spend the Night Together,” another Stones hit. But radio deejays were uncomfortable with the sexual innuendo on the A side, and chose to play the flip, which hit number one, while “Let’s Spend The Night Together” never made it past #55 on the Billboard Hot 100. 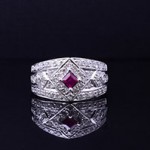 What does the song have to do with rubies? Admittedly, not much, but it might be fun to hum as you browse pawn shops in Northern Virginia.