We all have our preferred pens, but, chances are, they don’t cost more than a few dollars. But perhaps you remember when your grandfather had a pen and pencil set, or when a pen was an appropriate retirement gift. No less than GQ magazine maintained in 2013 that every gentleman should still have a good pen, but, even then, they weren’t necessarily talking about Montblancs. Collectors’ editions of these luxury pens show up regularly in pawn shops throughout Northern Virginia. 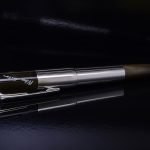 A Montblanc pen is more than a pen; it’s a symbol of bygone days, it’s a collectible, and it’s a rarefied treasure. It was the Montblanc Meisterstuck, introduced in 1924, that became iconic. JFK had one, and the Meisterstück Solitaire Royal, painstakingly set by hand with 4,810 (as the height of Mont Blanc, 4810 is a recurring number in the company’s designs) diamonds, became the world’s most expensive fountain pen.

As pens became less expensive and easier to use—i.e. no more fountain pens—Montblanc switched strategies to being introducing collections, much the same way watchmakers (and Montblanc also makes watches) do. And, many of these pens were ballpoints, rollerballs, mechanical pencils, and screenwriters, so as to appeal to modern users, but always maintaining the snowcap logo, a bird’s eye view of Mont Blanc.

The Patrons of the Arts and Writers series were launched in 1992, beginning with Lorenzo di Medeci and Ernest Hemingway respectively; the pens were intended to pay tribute to these luminaries as well as inspire those who used the pens. The Star Walker and Heritage collections are also popular. It’s amazing to think that pens still hold sway over the modern man, but when we get Montblancs at Loudoun Jewelry on Maple Avenue, they don’t stick around long.