The minute something becomes a trend, somebody is already bucking it. In the case of diamond engagement rings, it’s taken a while. But over the past decade or so, engagement rings don’t have to diamonds alone, or even diamonds at all. A betrothal can be marked with just about any ring at all, and colored stones are becoming a popular way to show style and individuality, along with commitment. Don’t believe us? Check out what celebrities—who are often the arbiters of the latest trends—are saying “I’m engaged with.” 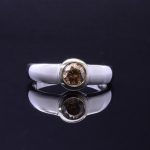 Actress Blake Lively sports a $2 million, 12-carat oval pink diamond set in rose gold (an unusual choice for an engagement ring as well!).  Mariah Carey has her beat with a 17-carat square-cut pink diamond rumored to be worth two and a half million.

Kate Middleton’s ring, which once belonged to Princess Diana, boasts a 12-carat sapphire; it’s valued a half a million but worth far more in sentiment and fame. Actress Elizabeth Hurley’s is nine carats. 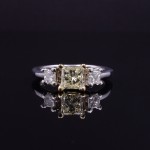