When a person opts to “put a ring on it,” the overwhelming popular choice for that ring is still a diamond. The ring custom itself is said to descend from a Roman custom that had wives wearing rings attached to keys, a symbol of their husband’s “ownership.” 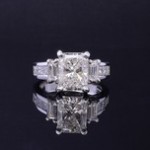 The diamond idea took off among European upper classes when, in 1477, Archduke Maximillian had a diamond engagement ring made for Mary of Burgundy. But access to and cost of diamonds meant that they were used sparingly, and, when they were, they were often paired with colored stones or enamels. They remained out of reach for most commoners; as last as the nineteenth century in America, some women were still receiving thimbles as a symbol of engagement. Today, you won’t find thimbles when you shop for jewelry in the DC area, but an assortment of engagement rings, most often diamond.

Though diamonds remained a choice for those with enough money to buy them, it wasn’t until the later nineteenth century, when huge veins of diamonds were discovered in South Africa that the price dropped enough to make them affordable to a larger market. But then DeBeers stepped in and created a cartel that controlled the flow—and the price, which would be kept affordable enough to keep demand steady. 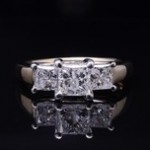 When hard economic times delivered a hit to diamond sales, consumers retreated to precious metal and cheaper stones as betrothal markers. So, DeBeers stepped in again with what might have been the most brilliant marketing slogan in jewelry history: “A Diamond Is Forever.” And, by extension, a diamond engagement ring means your commitment is forever. Celebrities jumped on board, and so did everybody else, rocketing diamond sales up more than fifty percent. It’s no surprise that now, more than 70 years, later, that slogan is still used—and diamonds are still the go-to engagement for over eighty percent of consumers. That’s why, when you shop for engagement rings at Loudoun Jewelry on Maple Avenue, you’ll find more diamond engagement rings than any other.